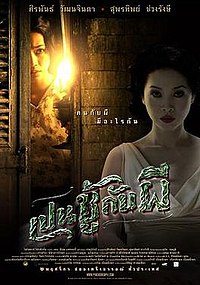 The Unseeable (; ; literally "Committing Adultery with Ghost") is a 2006 Thai horror film directed by Wisit Sasanatieng. This is the first film of another writer's screenplay by the director. The writer is Kongkiat Khomsiri, one of the "Ronin Team" credited with directing the 2005 Thai horror film Art of the Devil 2.

Set in 1934 Siam, the story involves a young pregnant woman named Nualjan who's searching for her missing husband. She comes to stay in the spooky rural mansion of a widow, Runjuan. The overgrown property is managed by the stern caretaker Somchit and inhabited by a number of other people, including another young woman, Choy, who becomes Nualjin's friend, as well as an old woman, a little girl and a man who is seen at the back of the property, digging a hole.