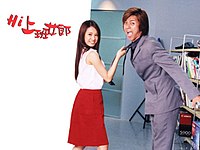 Hi Working Girl is a 2003 Taiwanese drama starring Jolin Tsai, Show Lo, and Megan Lai. It is based on Japanese manga Asakura-kun Chotto! created by Kenichi Oishi and Yumemi Ishiduka. It was produced by Comic Ritz with Chai Chih-ping and Yang Chia-yu as producers and directed by Huang Ko-i and Wu Ssu-ta. The series was broadcast in Taiwan on free-to-air China Television (CTV) from March 9, 2003, Television Broadcasts (TVB) from May 12, 2004, and China Central Television (CCTV) from October 1, 2006 for 23 episodes.