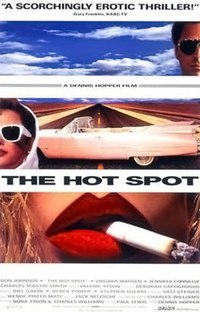 The Hot Spot is a 1990 American neo-noir film directed by Dennis Hopper and based on the 1952 book Hell Hath No Fury by Charles Williams, who also co-wrote the screenplay. It stars Don Johnson, Virginia Madsen, and Jennifer Connelly, and features a score by Jack Nitzsche played by John Lee Hooker, Miles Davis, Taj Mahal, Roy Rogers, Tim Drummond, and drummer Earl Palmer.

Drifter Harry Madox takes a job as a used car salesman in a small Texas town. In the summer heat, he develops an interest in Gloria Harper, who works at the car dealership. Dolly Hershaw, who is married to the dealership's owner, flirts with Harry and they begin a torrid affair.