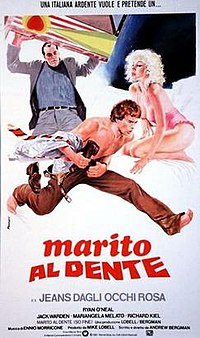 So Fine is a 1981 American comedy film written and directed by Andrew Bergman. The original music score was composed by Ennio Morricone. Ryan O'Neal was nominated for a Golden Raspberry Award as Worst Actor of the Decade.

At Chippenango State College (fictitious), Bobby Fine (Ryan O'Neal) is a professor of English, who learns during a meeting with Chair Lincoln of the English Department (Fred Gwynne) that he is a candidate for tenure at the college. During the meeting, Fine impresses Lincoln by responding in kind to an obscure line from William Shakespeare's The Merchant of Venice. Another professor (David Rounds) is amazed, and Bobby explains that with his father in the dress business, he'd always liked the play.