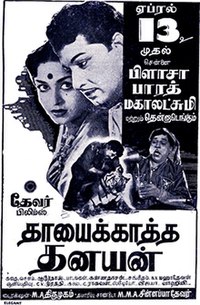 Thayai Katha Thanayan (; ) is a 1962 Indian Tamil-language film, directed by M. A. Thirumugam. The film features M. G. Ramachandran, M. R. Radha and B. Saroja Devi in lead roles. The film, produced by Sandow M. M. A. Chinnappa Thevar, had musical score by K. V. Mahadevan and was released on 13 April 1962.

Shekar (M. G. Ramachandran) is from an affluent family and Maragadham (B. Saroja Devi) from a poor family. Maragadham's brother Kandan (M. R. Radha) is a tea-stall owner who hates rich people because of some unpleasant incident from his past. A local goon Muthaiah (S. A. Asokan) loves Maragadham and wants to marry her. Neither Maragadham nor Kandan like Muthaiah. Shekar once saves Maragadham from Muthaiah, after which Maragadham gets a chance to save Shekar's life when during one of his hunting adventures, a tiger attacks him. Both develop a liking towards each other. However, Kandan's hatred towards the rich comes in the way of their love. Will the two lovers be able to unite or will Kandan's hatred and Muthaiah's evil intentions win?