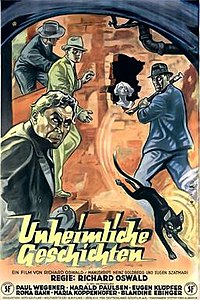 A crazed scientist, Morder (Paul Wegener), driven even crazier by his nagging wife, murders her and walls her up in a basement, a la Poe's The Black Cat. He then flees as the police and a reporter, Frank Briggs (Harald Paulsen), set out to track him down. Morder eventually escapes, by pretending to be insane, into an asylum. Though here the patients has managed to free themselves, lock up the guards, and take charge (inspired by Poe's The System of Doctor Tarr and Professor Fether). After Morder's final escape, he turns up as president of a secret Suicide Club (based on the short story by Stevenson).