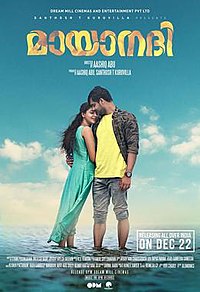 Mayanadi is a 2017 Indian Malayalam-language romantic thriller film directed and co-produced by Aashiq Abu, and written by Syam Pushkaran and Dileesh Nair. The film stars Tovino Thomas as a criminal on the run and Aishwarya Lekshmi as an aspiring actress. Their troubled love and struggle for survival form the basic plot of the film. It released on 22 December 2017 to widespread positive reviews from critics. The film was in several "Top films of the year lists" compiled by various medias and film journals.The film is a smooth flow of realistic emotions.

John Mathew (Tovino Thomas) is an orphan, living as a thug. He participates in an undercover deal on behalf of his boss, who is busy with his daughter's schooling. Mathew convinces his group that their boss is intentionally pulling out of the deal due to the risk involved. However, they reach the hotel without any issue. While Mathew is taking a bath, three police officers disguised as civilians enter the rooms and kill the accompanying three gang members. Mathew hides in the tub, and during his escape, he accidentally kills an officer. He reaches Kochi and moves in with his ex-boss and longtime friend Shaji.