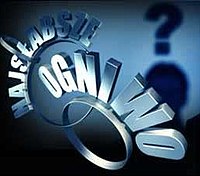 Najsłabsze ogniwo was the Polish version of the game show Weakest Link aired from 1 March 2004 to 26 January 2006 on TVN. The show premiered from Monday to Thursday at 8:10 PM (UTC+1) and was hosted by Kazimiera Szczuka. The show pitted eight contestants against each other for a pot of 27,000 złotys (PLN). This show was watched usually by 3 million viewers (average 1,5 million).