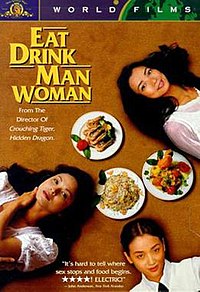 Eat Drink Man Woman is a 1994 comedy-drama film directed by Ang Lee and starring Sihung Lung, Yu-wen Wang, Chien-lien Wu, and Kuei-mei Yang. The film was released on 3 August 1994, and it was both a critical and box office success. In 1994, the film received the Asia Pacific Film Festival Award for Best Film, and in 1995 it received an Academy Award Nomination for Best Foreign Language Film.

The setting is 1990s contemporary Taipei, Taiwan. Mr. Chu, a widower who is a master Chinese chef, has three unmarried daughters, each of whom challenges any narrow definition of traditional Chinese culture: Chu Jia-Jen, a school teacher nursing a broken heart who converted to Christianity; Chu Jia-Chien, a fiercely independent airline executive who carries her father's culinary legacy, but never got to pursue that passion; and Chu Jia-Ning, a college student who meets her friend's on-again off-again ex-boyfriend and starts a relationship with him.