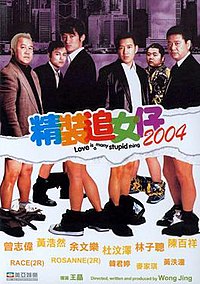 Love Is a Many Stupid Thing is a 2004 comedy film written, produced and directed by Wong Jing and starring Eric Tsang, Chapman To, Natalis Chan, Shawn Yue, Lam Chi-chung and Raymond Wong Ho-yin. The film is a parody of the 2002 hit film Infernal Affairs, which featured Tsang, To and Yue.