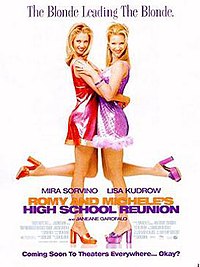 Romy and Michele's High School Reunion is a 1997 American comedy film directed by David Mirkin and starring Mira Sorvino, Lisa Kudrow, and Janeane Garofalo. The plot revolves around two 28-year-old girls who appear to have not achieved much success in life, and decide to invent fake careers to impress former classmates at their ten-year high school reunion. The characters are taken from the stage play Ladies Room, which also featured Kudrow.

Two 28-year-old women, Romy White and Michele Weinberger, live together in an apartment in Venice, Los Angeles, California. Romy works as a cashier in the service department at a Jaguar dealership and Michele is unemployed. They are single, unambitious, and enjoy a casual lifestyle of slacking, mocking TV and movies, and elaborate amateur dressmaking. While working, Romy encounters her former classmate from high school, Heather Mooney, once a rebellious, troubled girl who frequently smoked cigarettes in school, who is now a businesswoman, having invented the paper of a special type of cigarette. Heather informs Romy about their upcoming ten-year high school reunion in Tucson, Arizona.