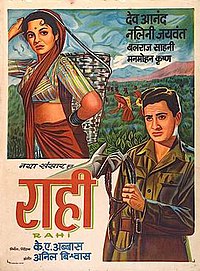 Rahi (Hindi: राही, The Wayfarer) is a 1953 Hindi social drama film produced and directed by K. A. Abbas.

Dev Anand is an ex-army officer who gets a job in a tea estate. He is hired as an over-all manager by the English owners. Anand proves a loyal and diligent worker meting out punishment to the workers on the behest of his owners. He falls in love with one of the tea-picking girls (Nalini Jaywant). The workers rebel against the harsh and sometimes brutal management of the estate owners. Nalini Jaywant is shot by the owner in the rioting when the workers get out of control. A gradual change has also come over Anand, especially in his dealings with the tea workers, and losing interest, he leaves the place.