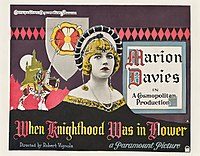 When Knighthood Was in Flower 1922

When Knighthood Was in Flower is a 1922 American silent historical film directed by Robert G. Vignola, based on the eponymous novel by Charles Major and play by Paul Kester. The film was produced by William Randolph Hearst (through his Cosmopolitan Productions) for Marion Davies and distributed by Paramount Pictures. This was William Powell's second film. The story was re-filmed by Walt Disney in 1953 as The Sword and the Rose, directed by Ken Annakin.

Mary Tudor is forced by her brother Henry VIII to marry Louis XII as part of a peace agreement but she falls in love with Charles Brandon. Mary flees with him, but the two lovers are captured. Brandon is framed for murder and Mary agrees to marry Louis XII if his life is spared. Brandon is exiled and Louis XII, old and sick, dies shortly after the wedding. After an attempt on the part of Louis XII's nephew Francis I to wed Mary, she finally marries Brandon.