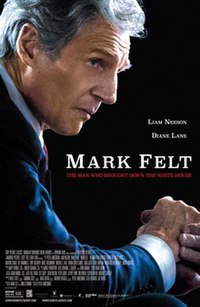 Mark Felt: The Man Who Brought Down the White House is a 2017 American biographical political thriller film written and directed by Peter Landesman, and based on the 2006 autobiography of FBI agent Mark Felt, written with John O'Connor. The film depicts how Felt became the anonymous source nicknamed "Deep Throat" for reporters Bob Woodward and Carl Bernstein and helped them in the investigation which led them to the Watergate scandal, which resulted in the resignation of President Richard Nixon.

The movie start on April 11th 1972. Nixon's advisors at the White House ask Mark Felt how to ask J. Edgar Hoover to step aside as the FBI director. Some days later, Hoover dies. Pat Gray becomes the acting FBI director. In June 1972, the several ex-CIA and FBI agent burglarize Watergate hotel to bug the DNC headquarters.