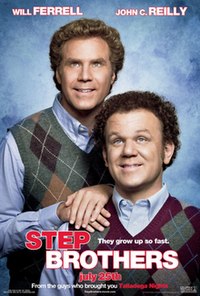 Step Brothers is a 2008 American comedy film directed by Adam McKay, produced by Jimmy Miller and Judd Apatow, and written by Will Ferrell and McKay from a story by Ferrell, McKay, and John C. Reilly. It follows Brennan (Ferrell) and Dale (Reilly), two grown men who are forced to live together as brothers after their single parents, with whom they still live, marry each other. Richard Jenkins, Mary Steenburgen, Adam Scott, and Kathryn Hahn also star.

Brennan Huff and Dale Doback are immature adults still living at home. Brennan lives with his divorced mother, Nancy, and Dale lives with his widowed father, Robert. Robert and Nancy meet, fall in love, and get married, forcing Brennan and Dale to live with each other as step brothers.