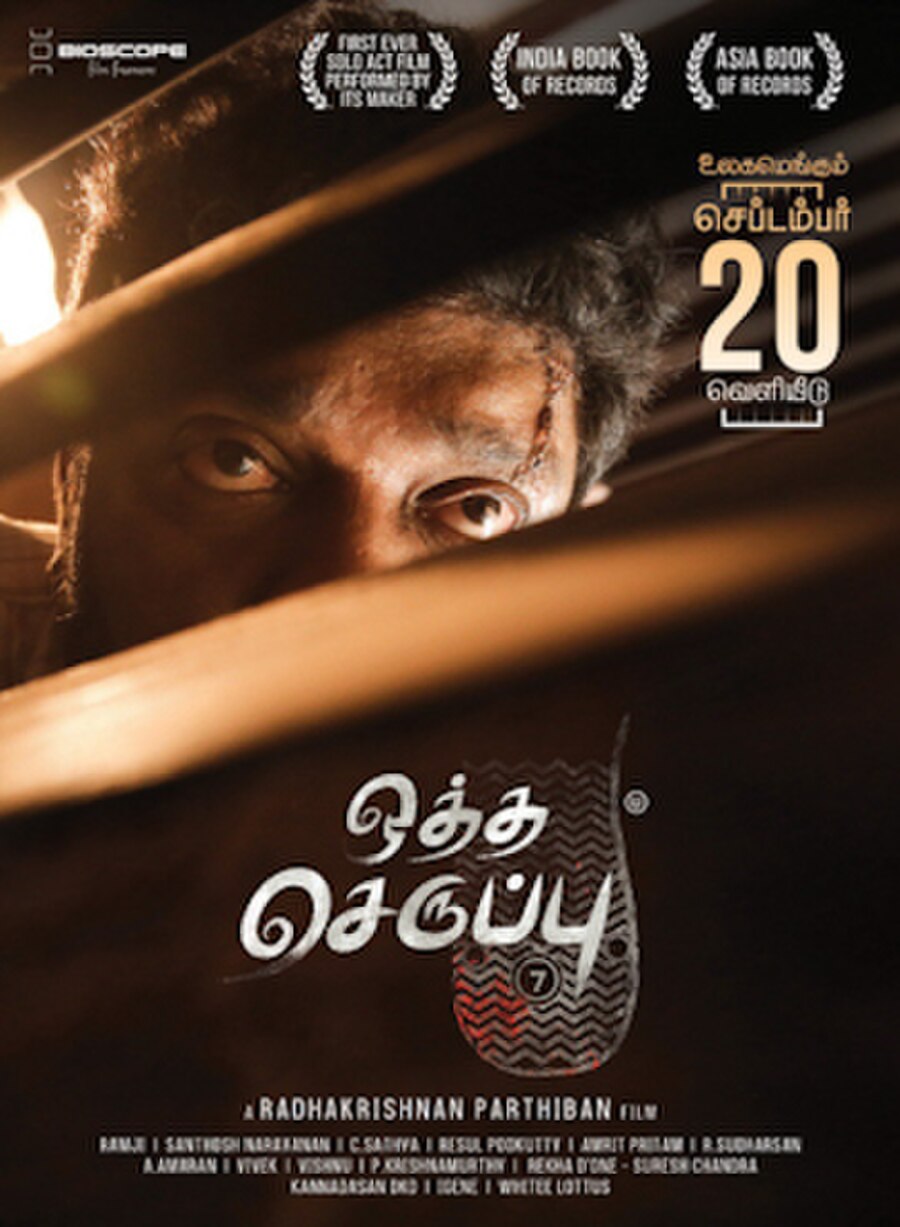 Oththa Seruppu Size 7, simply known as Oththa Seruppu, is a 2019 Indian Tamil-language thriller film produced, written and directed by R. Parthiban under the banner Bioscope Film Framers. The film stars Parthiepan himself as the only character. The background score for the film is composed by C. Sathya and the film features only one song, which is composed by Santhosh Narayanan. The film entered the Asia Book of Records and India Book of Records for having a single person writing, directing, solo acting and producing a film. It is reported that the film became the thirteenth film in the world with solo act and also the first South Indian film to feature a single actor.

Masilamani (R.Parthiepan) is a suspect in a murder case and cops take him in custody for investigation. The movie starts with a middle-aged Masilamani (Parthiban) being interrogated by police personnel in a police station. The audience get to hear only the voices of everyone else other than Masilamani. The deputy commissioner is leading the interrogation. Though some other cops in the unit suggest that they better use the typical police interrogation technique (which uses force and human right violation techniques), the deputy commissioner refuses saying that there is already a letter from human rights commission that they will be watching over this investigation. At some point it becomes clear that Masilamani has a kid who needs medication and even with medication Masilamani's son is expected to live only for few more years. Masilamani outwits the cops during the interrogation and hence a lady psychologist is brought in to help solve the case. It is revealed that Masilamani wife is dead and her body is presently held at the mortuary. Eventually Masilamani starts to confess to not only the one murder he was accused of, but also to two more murders; all three of which happened using the same Modus Operandi (MO). Masilamani during his confession states that he married Usha. They have a kid who is suffering from a terminal disease. His wife started to have affairs. When Masilamani confronted his wife about the affair, she regrets her affair and says that she did it for the money to pay for their son's medical expense. Masilamani though dejected agrees to live with his wife, provided she changes her way of life. She also blames the men in her affair for forcing her to sleep with them because they have a video of her taking bath and are blackmailing her with her nude video. Masilamani realizing that he won't be able to legally fight these powerful men, decides to murder them using a particular MO, which includes leaving a "single slipper of size 7" next to the dead bodies. Usha accidentally finds the other pair of the "single slipper of size 7" and figures out that Masilamani is involved in the serial killing of the men who she had affairs with. In a panic mode, Usha arranges henchman to murder Masilamani. It is also revealed that Usha had affairs not because of blackmail but rather slept with those men willingly. But due to quirk of fate, Usha gets killed in a road accident, as the henchman escapes( But later it is revealed that henchman was also murdered in the same MO). Masilamani continues his revenge plot and kills the rest of the men who had an affair with his wife. He always leaves a "single slipper of size 7" next to all the murders. It is revealed that many years back the current head of police personnel helped a powerful minister to get away with murdering his own brother and in the process accidentally left a "single slipper of size 7" next to his dead brother's body. Masilamani knew of the murder and the modus operandi of the murder and even had proof of the murder. Now that Masilamani has committed these three murders in the same MO. he makes a veiled threat that he will reveal the proof of the scandal if he is not released of his crime. He even states that the same MO in all the crimes will suggest that the one who murdered the minister's brother will be the prime suspect in all the subsequent murders. Because a powerful minister and a cop were involved in a murder and the subsequent cover-up, the cops decide to let go of Masilamani for the fear of all truths coming out. The movie ends with Masilamani walking out of the police station, with his son, making peace with his wife's death.