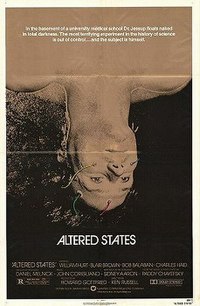 Altered States is a 1980 American science fiction body horror film directed by Ken Russell and based on the novel of the same name by playwright and screenwriter Paddy Chayefsky. The film was adapted from Chayefsky's 1978 novel and is his final screenplay. The novel and the film are based in part on John C. Lilly's sensory deprivation research conducted in isolation tanks, under the influence of psychoactive drugs like mescaline, ketamine and LSD.

Edward Jessup, a Columbia University psychopathologist, is studying schizophrenia, and begins to think that "our other states of consciousness are as real as our waking states." He begins experimenting with sensory deprivation using a flotation tank, aided by two like-minded researchers, Arthur Rosenberg and Mason Parrish. At a faculty party, he meets fellow "whiz kid," and his future wife, Emily.