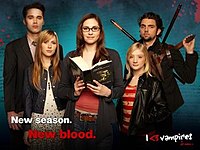 I Heart Vampires (Often stylized as I <3 Vampires) is a web television series produced by Take180 (a subsidiary of The Walt Disney Company). The series consists of a first season of 22 episodes which ran from March 19, 2009 until September 11, 2009, a second season of 20 episodes which premiered on January 28, 2010, as well as two derivative series that run concurrently with the second season, and concluded on June 4, 2010. The series is well received, and is the first non-variety sketch show on the site to make it past a first season. The show, like many on the site, took fan submissions and integrated them into each episode.

The show is a parody of the fandom that surrounds popular vampire franchises like Twilight.