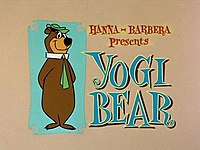 The Yogi Bear Show is an American comedy animated television series produced by Hanna-Barbera Productions that centers on the misadventures of forest-dwelling bear Yogi in Jellystone Park. The show debuted in syndication on January 30, 1961, and ran for 33 episodes until January 6, 1962. Two other segments for the show were Snagglepuss and Yakky Doodle. The show had a two-year production run.