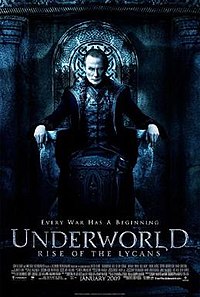 Underworld: Rise of the Lycans 2009

Underworld: Rise of the Lycans is a 2009 American action horror film directed by Patrick Tatopoulos and starring Michael Sheen, Bill Nighy, Rhona Mitra, Steven Mackintosh, and Kevin Grevioux. It is the third (chronologically, the first) installment in the Underworld franchise and a prequel to the 2003 film Underworld. The film focuses primarily on the origins of the characters and the events that lead up to the Vampire–Lycan war. Kate Beckinsale, who starred in the previous Underworld movies, appears briefly at the end of the movie.

The film tells the story of Lucian, the first werewolf born capable of taking human form and the first to be called a Lycan. Viktor, a vampire elder, raises the child, envisioning a race of Lycan slaves guarding the coven's fortress during the day and working as laborers for the vampires at night. The forests and the countryside are filled with savage werewolves born from William's rampage, and human nobles have taken to begging Viktor for protection against the beasts: he grants it in exchange for tributes of silver, which enables him to keep his slaves under control. As Lucian grows up, he and Viktor's daughter Sonja (Rhona Mitra) fall in love, and in their adult years they begin a secretive intimate relationship. Sonja is reckless and insubordinate, and one night Lucian escapes the shackles preventing him from turning werewolf and rescues Sonja from his werewolf brethren. Despite acknowledging that Lucian rescued his daughter, Viktor cannot forgive the escape and has Lucian whipped and imprisoned.