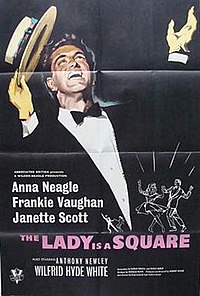 The Lady Is a Square is a 1958 British comedy musical film directed by Herbert Wilcox and featuring Anna Neagle, Frankie Vaughan and Janette Scott. Its plot follows an aspiring singer who goes to work as a butler in the house of a classical music patron. It was Neagle's final film appearance and the last film directed by Wilcox although he produced several further films before his bankruptcy in 1964. The film was re-released theatrically in 2001 by Paramount Pictures in North America and Universal Pictures internationally, in DVD in 2002 and DVD(and Blu-ray) in 2006

Mrs Baring, a businesswoman and patron of classical music, has arranged for a celebrated Eastern Bloc musician, Spolenski, to play in a series of concerts in Britain. However, she is aware that she is on the brink of bankruptcy and the Spolenski tour offers a final chance to save her finances.