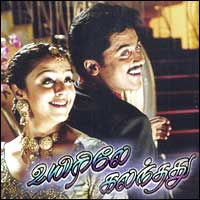 Uyirile Kalanthathu is a 2000 Indian Tamil-language romantic drama film directed by Jaya which stars Suriya, Jyothika and Raghuvaran in the lead roles, with Sivakumar and Radhika in supporting roles. The film opened in September 2000 to mixed reviews from critics. The film was dubbed into Hindi as Surya Bhai MBBS (2007) and in Telugu as Poratam.

Suriya (Suriya) is a medical college student. Priya (Jyothika) is his girlfriend, Sethu Vinayagam (Sivakumar) is his father, and Raghuram (Raghuvaran) is his elder brother, who is the district collector. Suriya is the youngest son of the family, and this gives much heartburn to Raghuram. Their rivalry begins from childhood and can be illustrated by the scene where the elder brother pinches his baby brother just to see him cry. The jealousy grows into adulthood. Raghuram's aim in life is to see Suriya's life beset with problems, thanks to him. However, Suriya and his parents are unaware of the jealousy that has possessed Raghuram. When Raghuram discovers the love between Suriya and Priya, he passes on the word to Priya's elder brother, who is a known rowdy around the area. He does this thinking the rowdy would manage to beat up Suriya and perhaps separate both Suriya and Priya. This plan backfires, when the rowdy is more than happy to get them both married because he cares about his sister's happiness. Raghuram then pushes Suriya over a cliff edge. Later, in court, Suriya is revealed to be alive and unites with his family and Priya, and Raghuram is sent for treatment.