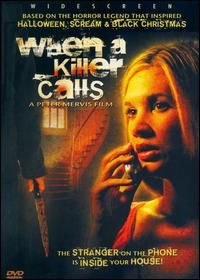 When a Killer Calls is a 2006 direct-to-DVD horror film directed by Peter Mervis and starring Sarah Hall, Mark Irvingsen, Robert Buckley, Derek Osedach, and Rebekah Kochan. It was distributed by B movie company The Asylum. The film was released in February 2006, to coincide with the theatrical release of the 2006 remake of When a Stranger Calls.

A killer goes into a house, killing a mother and her two children. In the process, he takes pictures on his cell phone of the attack. Elsewhere, Trisha (Rebekah Kochan) is babysitting a girl, Molly, while her parents are out. She needs this to go well because her last babysitting job with the Hewitts did not end on a good note. On the way to a speaking engagement, Molly's parents are killed by an off-screen attacker that they obviously knew. Meanwhile, Trisha begins getting increasingly threatening phone calls and texts. After, she puts Molly to bed, the caller escalates his taunting. He sends her pictures of the previous murders claiming he did it for her. Although she believes it is her boyfriend Matt calling her, she calls the police who inform her that they will trace the call.