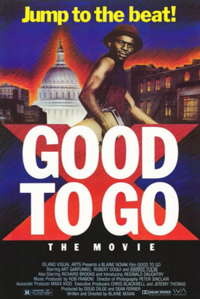 Good to Go (also titled as Short Fuse) is a 1986 crime thriller film written and directed by Blaine Novak, and stars Art Garfunkel as a beat journalist pursuing a murder investigation, with the Washington, D.C. go-go-scene in the backdrop.

S.D. Blass (Art Garfunkel) is a beat journalist for the Washington Daily Tribune newspaper in Washington, D.C. His editor-in-chief pressures him to deliver more featured stories, as it's been too long since Blass has had a decent article printed. Blass reaches out to Matthew Harrigan (Harris Yulin), a detective for the Washington Metropolitan Police department, looking for a good story to pursue.