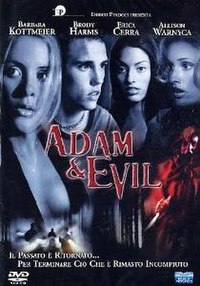 Adam and Evil (also known as Halloween Camp 2: Scream If You Wanna Die Faster in the United Kingdom) is a 2004 American slasher film directed by Andrew Van Slee. It stars Erica Cerra, James Clayton, and Jodie Graham. The plot follows a group of friends who are stalked and murdered by a masked killer during a camping trip.

A young group of friends head out to the woods for fun and frolics, but soon find themselves embroiled in a deadly game of cat and mouse with a masked killer.