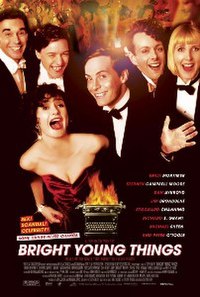 Bright Young Things is a 2003 British drama film written and directed by Stephen Fry. The screenplay, based on the 1930 novel Vile Bodies by Evelyn Waugh, provides satirical social commentary about the Bright Young People—young and carefree London aristocrats and bohemians—as well as society in general, in the interwar era.

The primary characters are earnest aspiring novelist Adam Fenwick-Symes and his fiancée Nina Blount. When Adam's novel Bright Young Things, commissioned by tabloid newspaper magnate Lord Monomark, is confiscated by HM customs officers at the port of Dover for being too racy, he finds himself in a precarious financial situation that may force him to postpone his marriage. In the lounge of the hotel where he lives, he wins £1,000 by successfully performing a trick involving sleight of hand, and the Major offers to place the money on the decidedly ill-favoured Indian Runner in a forthcoming horserace. Anxious to wed Nina, Adam agrees, and the horse wins at odds of 33–1, but it takes him more than a decade to collect his winnings.