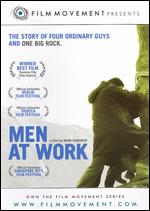 Four men on a skiing trip encounter a tall boulder standing precariously near a cliff. The men resolve to push it over but find the task to be more difficult than anticipated. Over the course of a day the men unbury the rock, culminating in the boulder falling unnoticed while the men argue about whether to continue.