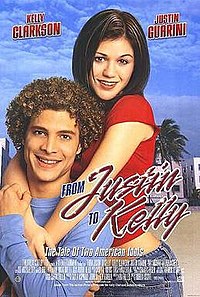 From Justin to Kelly is a 2003 American musical romantic comedy film written by Kim Fuller and directed by Robert Iscove. The film, starring American Idol first season winner Kelly Clarkson and runner-up Justin Guarini, won the Golden Raspberry Award for "Worst 'Musical' of Our First 25 Years" in 2005. This film is often regarded as one of the worst movies ever made.

The film is set during spring break in Fort Lauderdale, Florida; Texan singing waitress Kelly Taylor meets Pennsylvanian college student Justin Bell, who then fall for each other, and various romantic complications ensue. Kelly's friend Kaya falls in love with charming busboy Carlos; Kelly's other friend Alexa schemes to keep Justin and Kelly from meeting; Justin's friend Brandon is always getting on the wrong side of a sexy beach patrolwoman; and Justin's other friend Eddie tries to hook up with a cyber-pal.