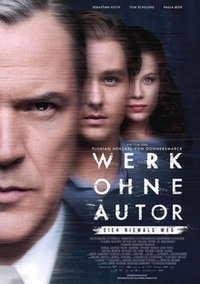 Never Look Away is a 2018 German coming-of-age romantic drama film written and directed by Florian Henckel von Donnersmarck. It was nominated for a Golden Lion at the 75th Venice International Film Festival and for a Golden Globe by the Hollywood Foreign Press Association. It was nominated for two Academy Awards at the 91st Academy Awards, in the Best Foreign Language Film and Best Cinematography categories. This was only the second time that a German-language film by a German director was nominated for an Oscar in multiple categories, the other film being Wolfgang Petersen's Das Boot 36 years prior.

As a child during the Nazi era, Kurt Barnert (inspired by Gerhard Richter) visits an exhibit of "Degenerate Art" in Dresden with his beautiful young aunt Elisabeth. While there, he is mesmerized by Girl with Blue Hair, a modernist sculpture by Eugen Hoffmann. Later at home, Kurt walks in on Elisabeth playing the piano in the nude. She rambles euphorically, saying she is "playing a concert for Hitler" and hits herself on the head with a glass ashtray. She also tells Kurt to "never look away" because "everything that is true holds beauty in it."