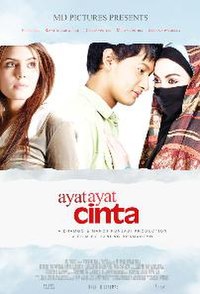 Ayat-Ayat Cinta is an Indonesian drama film from MD Pictures, Producer Manoj Punjabi and Dhamoo Punjabi. Starring as main casts are , Rianti Cartwright, Carissa Putri, Melanie Putria, and Zaskia Adya Mecca. It is a romantic religious drama based on the bestselling novel with the same title by Habiburrahman El Shirazy. While the story is set in Cairo, Egypt, the film was shot in India and Semarang, Indonesia. Ayat-Ayat Cinta was released on February 28, 2008 in Indonesia, May 8, 2008 in Singapore, and June 19, 2008 in Malaysia.