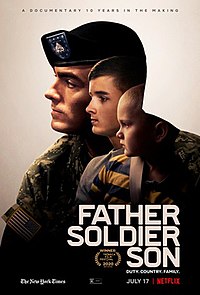 Father Soldier Son is a 2020 American documentary film directed and produced by Catrin Einhorn and Leslye Davis. It follows the family of Brian Eisch, a Sgt. First Class in the United States Army, and the effects of his deployment to the War in Afghanistan has on him and his young sons. The film was released on July 17, 2020 by Netflix.

In 2010, U.S. Army Sgt. First Class Brian Eisch is a single father of two sons, Isaac, age 12, and Joey, age 7. While he is away on deployment in Afghanistan for 6 months, the boys live with their uncle, and long to have their father back home. They are happily reunited for a brief 2-week interlude in the deployment, during which they enjoy camping, hunting, and fishing together. Brian expresses that his greatest fear is returning home affected by his wartime experiences, and potentially becoming angry and yelling at his kids, a sentiment echoed by his kids, who have heard such stories from their friends.