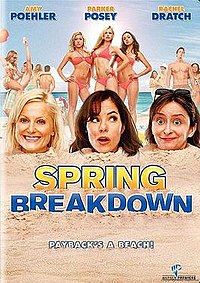 Spring Breakdown is a comedy film directed by Ryan Shiraki and starring Amy Poehler, Parker Posey, and Rachel Dratch. Three years after principal photography, and after the film's owner, Warner Independent Pictures, was shut down by its parent company, it was released direct-to-video in 2009.

The film begins with Gayle, Becky and Judi performing in McCormick State College's Senior Talent Show in 1992. The three of them were the 'losers' and geeks in college but were always hopeful about their future. The next scene then jumps to 15 years later. Gayle is now a guide dog trainer for the visually handicapped. She asks her client out on a date but gets rejected after he touches her face. Becky is an office manager for Senator Hartmann. Judi and her fiance, William, go for relationship counseling and insist that there are no secrets between them. Becky returns home only to find her cat, Honey, dead. The three of them hold their usual 'make your own pizza party' and play their usual 'movie game'. They decide to go on a trip to Tempe, Arizona to the Wimmin's Music Festival.