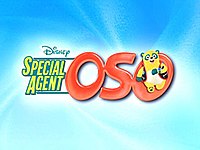 Special Agent Oso is an American children's CGI-animated TV series. The series was created by Ford Riley. It premiered on April 4, 2009 with 2 episodes airing that day as part of Disney Channel's Playhouse Disney block, and aired two seasons of 60 episodes through May 17, 2012.

Each episode begins with Special Agent Oso in the midst of a training exercise, which he usually fails on his first try, causing him to say "It's all part of the plan more or less" and Paw Pilot, his computerized assistant, which gives him a special alert by saying "Special Alert, Special Alert". Invariably, during the exercise, at least one child is confronted with a simple task which they have trouble completing, an event which a Shutterbug drone notices. Oso is always assigned to the case, and Paw Pilot, along with the unseen Mr. Dos, illustrate his client's plight and assign him a mission to help the child complete the task. To do so, Paw Pilot provides Oso with three special steps, a simplified step-by-step guide to completing the task. Oso is transported to the child's location and attempts to follow the steps as the three special steps are, in and of themselves, usually too vague to complete the task properly, the Paw Pilot also gives further elaborations, including at least one helpful trick. On the third and final step, the Paw Pilot senses the time limit on the task between 3 and 19 seconds and begins counting down when the time limit is near. Oso and the child usually complete the task just as the time is up. Then Paw Pilot says "[Special] Assignment Complete".