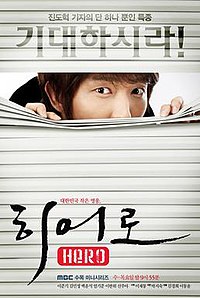 Hero is a 2009 South Korean action-comedy television series about passionate reporters working for a third-rate newspaper who fight against corruption and inequality in society. Starring Lee Joon-gi, Yoon So-yi, Um Ki-joon and Baek Yoon-sik, it aired on MBC from November 18, 2009 to January 14, 2010, on Wednesdays and Thursdays at 21:55 for 16 episodes.