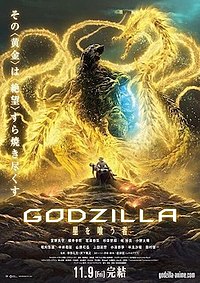 Following the destruction of Mechagodzilla City, the remaining Bilusaludo on the Aratrum demand justice for Haruo destroying what they saw as necessary to defeat Godzilla. The humans disagree, believing Haruo exposed the Bilusaludo's true intentions of assimilating Earth. The Bilusaludo revolt and shut down the ship's engine room, forcing the ship to run on secondary batteries for the next two days. On Earth, Haruo learns from Dr. Martin that Yuko is rendered brain-dead with the nanometal in her body keeping her alive. He also learns that those treated by the Houtua survived the nanometal's attempt to absorb them, with Methphies deceiving the survivors into believing their survival was divine intervention. When confronted by Haruo about converting the remaining humans, Methphies reveals his plan to bring the Exifs' god to Earth and needs Haruo's help to make it possible. Dr. Martin advises Haruo to hide until tensions ease.