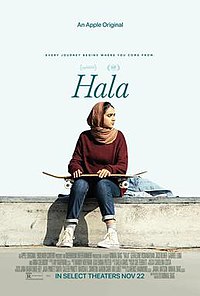 Hala is a 2019 American drama film written and directed by Minhal Baig. The film was screened in the U.S. Dramatic Competition section at the 2019 Sundance Film Festival, and was released in a limited theatrical release on November 22, 2019, followed by digital streaming on December 6, 2019, by Apple TV+. The film received generally positive reviews. It is based on a previous short film by Baig made in 2016 by the same name.

Hala Masood is a seventeen year old Pakistani American Muslim girl struggling with the clash of her family's values versus her desires. Her mom worries about Hala being near boys and skateboarding, while she has a secret crush on a boy in her school named Jesse, who's a non-Muslim (it's expected Hala will have her marriage arranged with a Muslim man). Things gradually come to a head as Hala is drawn toward Jesse, against her family's wishes. In the meantime, she learns her parents' marriage has problems she never knew of before.