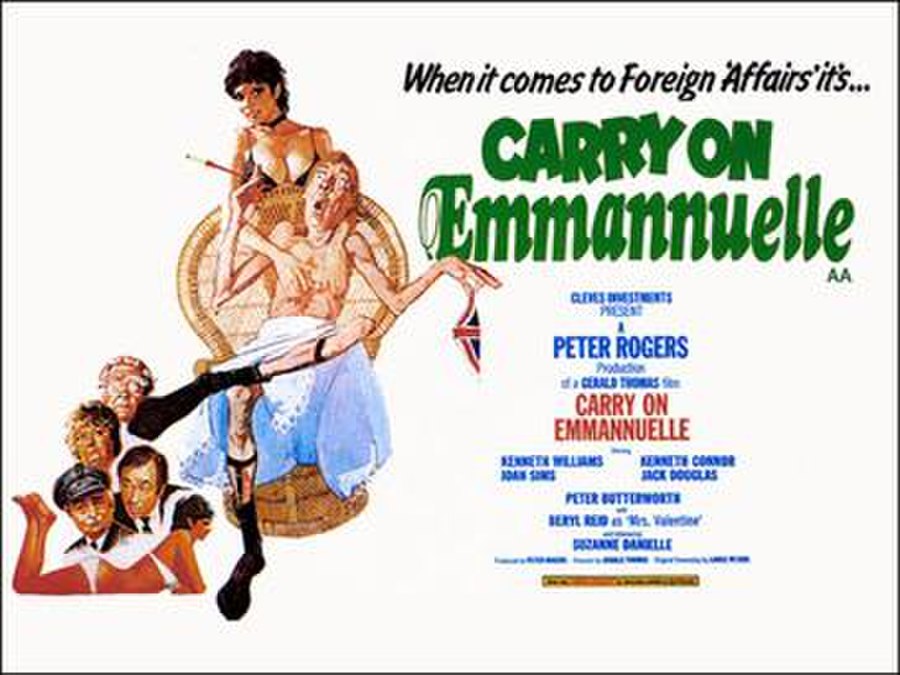 Carry On Emmannuelle is a 1978 British comedy film, the 30th release in the series of 31 Carry On films (1958–1992). Released in November 1978, this was the last Carry On film to be made until Carry On Columbus in 1992. The film was to be the final Carry On for many regulars, including Kenneth Williams (in his 26th Carry On), Kenneth Connor (in his 17th), Joan Sims (in her 24th) and Peter Butterworth (in his 16th). Jack Douglas is the only regular from this film to bridge the gap to Carry On Columbus. Beryl Reid, Henry McGee and Suzanne Danielle make their only appearances in the series here. The film featured a change in style, becoming more openly sexual and explicit. This was highlighted by the implied behaviour of Danielle's character, though she does not bare any more flesh than any other Carry On female lead. These changes brought the film closer to the then popular series of X-rated Confessions... comedies, or indeed the actual Emmanuelle films that it parodies. This film, as well as the original cut of Carry On England were the only films in the series to be certified AA by the British Board of Film Censors, which restricted audiences to those aged 14 and over.

Emmannuelle Prévert (Suzanne Danielle) relieves the boredom of a flight on Concorde by seducing timid Theodore Valentine (Larry Dann). She returns home to London to surprise her husband, the French ambassador, Émile Prevert (Kenneth Williams) but first surprises the butler, Lyons (Jack Douglas). He removes her coat, only to find that she has left her dress on the aircraft. The chauffeur, Leyland (Kenneth Connor), housekeeper, Mrs Dangle (Joan Sims), and aged boot-boy, Richmond (Peter Butterworth), sense saucy times ahead… and they are right! Émile is dedicated to his bodybuilding, leaving a sexually frustrated Emmannuelle to find pleasure with everyone from the Lord Chief Justice (Llewellyn Rees) to chat show host, Harold Hump (Henry McGee). Theodore is spurned by Emmannuelle, who has genuinely forgotten their airborne encounter, and, despite reassurances from his mother (Beryl Reid), exacts revenge by revealing Emmannuelle's antics to the press. However, after a visit to her doctor (Albert Moses), she discovers that she is pregnant and decides to settle down to a faithful marriage with Émile… and dozens of children.