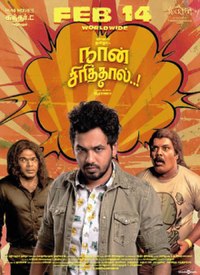 Naan Sirithal is a 2020 Indian Tamil-language comedy film written and directed by Raana in his directorial debut. Following the success of Meesaya Murukku and Natpe Thunai, Sundar C co-produced Aadhi's third film and it became a hat-trick hit.

The film opens with an interview given by Thyagu (Eruma Saani Vijay), Gopi (Badava Gopi) and Gandhi (Hiphop Tamizha Aadhi). Gandhi then starts to tell the story of his life. He is a happy go lucky man who works in the IT. He is in love with his office colleague Ankitha (Iswarya Menon). Due to unfortunate circumstances at his workplace, he is told to clear his failed exams in Engineering, or else he would lose his job. Ankitha also pressurizes him to study well and pass the exam, yet he is unable to study properly and enters the exam hall. Seeing the question paper and getting insulted by his friend (Lallu) and an examiner (Satheesh) which contains out of syllabus questions, all the stress from various parts of his life gets accumulated and Gandhi starts to laugh uncontrollably in the exam hall. This is when his laughing problem begins. This condition is called as 'Pseudobulbar affect', for which he faces trouble in various places and even Ankitha breaks up with him, so he consults a psychiatrist, Veerabadhran (Pandiarajan). He is not allowed to tell about this to anyone as he has tied a sacred talisman which will help him solve his problems. Meanwhile, Gandhi's close friend Dilli Babu (Yogi Babu) is heartbroken because his girlfriend, Priya (Maria Juliana) is marrying someone else and tells them that he plans to commit suicide. So Gandhi and his friends go in search of him.