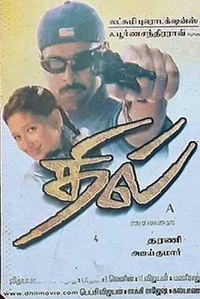 Dhill is a 2001 Indian Tamil-language action film directed by Dharani. The film stars Vikram and Laila in the lead roles, while Ashish Vidyarthi, Nassar and Vivek play supporting roles. The film's score and soundtrack are composed by Vidyasagar, while Gopinath handled the camera work.

Dhill is the story about Kanagavel (Vikram), whose only dream is to become a police officer. He succeeds in passing the exams and wins a girlfriend named Asha (Laila). One night after having dinner at a restaurant near the beach, Kanagavel goes to pay the bill, leaving Asha behind. At that moment a corrupt police officer named Inspector 'Encounter' Shankar (Ashish Vidyarthi) drinks and behaves indecently to Asha. He then attempts to assault her but is severely beaten up by Kanagavel, and he receives a scar on his face. Shankar, angered by this, seeks revenge against Kanagavel. In the end, Kanagavel kills Shankar and his goons.