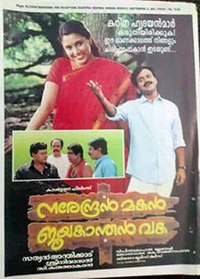 Narendran Makan Jayakanthan Vaka is a 2001 Indian Malayalam-language satirical film directed by Sathyan Anthikkad and written by Sreenivasan. The story follows Jayakanthan (Kunchacko Boban), who comes from Kumbakonam, to his late father's village in Paruthippara, Kannur district, to claim his father's property. The film marks the acting debut of Asin. The film released on 24 August 2001 coinciding with the festival of Onam. It was a critical and commercial success.

The story is about Jayakanthan (Kunchacko Boban) who comes to claim his father Narendran's property in their native village. There he meets Vinodini (Samyuktha Varma) who is the panchayat president and a strict follower of the rules. Swathi (Asin) is Jayakanthan's cousin and her father Balakrishnan Nambiar (Janardhanan) is worried that Jayakanthan, his nephew, has come to marry her and inherit their property. Bhargavan (Sreenivasan) has usurped Narendran's land, but Jayakanthan is unaware of this and becomes his good friend. The remaining of the plot is about how things fall into place.