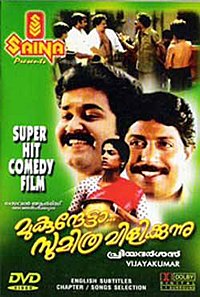 Mukunthetta Sumitra Vilikkunnu is a 1988 Indian Malayalam-language romantic comedy film directed by Priyadarshan and written by Sreenivasan. It stars Mohanlal, Sreenivasan, and Ranjini. The story is based on the Marathi play Sasa Aani Kasav (Hare and Tortoise), which was earlier adapted into the 1983 movie Katha.

Mukundan K. Kartha (Mohanlal) is a simple man, with a decent job, whose old college classmate and friend Viswanath (Sreenivasan) comes to meet him. He lives in a small residential colony in Chennai, where there's a water shortage and the people struggle to make ends meet. The damsel of the colony, Sumithra (Ranjini) likes Mukundan. Viswanath is a fraud and con-man and he makes Mukundan and the people of his colony believe that he is an influential person and classmate of the Public Works Department minister. He makes the people believe that, due to his influence, water pipes arrived at the colony.