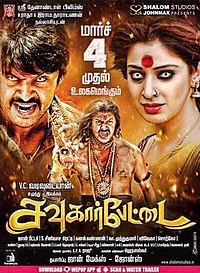 Kunjuring is a 2016 Tamil horror film directed by Vadivudaiyan starring Srikanth and Lakshmi Rai with music composed by John Peter. The film was released only in chennai on 4 March 2016.

Vetri and Maya love each other. Vetri's twin brother Shakthi wants to molest Maya, so he is thrown by his parents. A few years later, villains kill Vetri, his parents, and Maya. They return as ghosts and eliminate them one by one. Shakthi returns as a powerful tantrik and kills all the villains for his family's dispute. He now uses his power to kill Vetri, and at the same time, wants to have sex with Maya as revenge. In the end, good wins over evil.