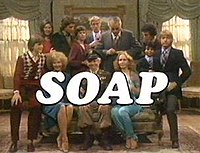 Soap is an American sitcom television series that originally ran on ABC from September 13, 1977, until April 20, 1981. The show was created as a night-time parody of daytime soap operas, presented as a weekly half-hour prime time comedy. Similar to a soap opera, the show's story was presented in a serial format, and featured melodramatic plotlines including alien abduction, demonic possession, extramarital affairs, murder, kidnapping, unknown diseases, amnesia, cults, organised crime warfare, a communist revolution and teacher-student relationships. In 2007 it was listed as one of Time magazine's "100 Best TV Shows of All-TIME", and in 2010, the Tates and the Campbells ranked at number 17 in TV Guides list of "TV's Top Families".

Soap is set in the fictional town of Dunn's River, Connecticut.