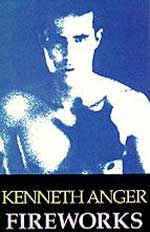 Fireworks (1947) is a homoerotic experimental film by Kenneth Anger. Filmed in his parents' home in Beverly Hills, California, over a long weekend while they were away, the film stars Anger and explicitly explores themes of homosexuality and sado-masochism. It is the earliest of his works to survive. Fireworks is known for being the first gay narrative film in the United States.

The film opens with the image of a sailor holding a lifeless body. A sleeping man wakes up in bed and gets dressed. The dreamer walks through a door labeled "Gents", to find himself in a bar. He admires the body of a muscular sailor and offers his cigarette, only for the sailor to attack him. The sailor uses a flaming bundle of sticks to light the dreamer's cigarette.