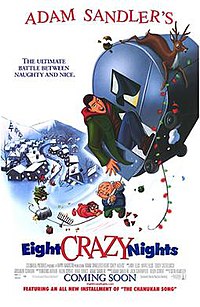 Eight Crazy Nights (also known as Adam Sandler's Eight Crazy Nights) is a 2002 American animated musical holiday comedy-drama film directed by Seth Kearsley and produced, co-written by, and starring Adam Sandler in his first voice-acting role. The film is animated in the style of television holiday specials and, unlike most mainstream holiday films, centers on Jewish characters during the Hanukkah season, as opposed to the Christian celebration of Christmas.

In the small fictional town of Dukesberry, New Hampshire, Davey Stone is a 33-year-old Jewish alcoholic troublemaker with a long criminal record whose antics have long earned him the community's animosity. Davey is arrested for refusing to pay his bill at Mr. Chang's Chinese restaurant, attempting to evade arrest ("Davey's Song"), stealing a snowmobile, and destroying festive ice sculptures in the process. At Davey's trial, Whitey Duvall, a 70-year-old volunteer referee from Davey's former basketball league, intervenes. At Whitey's suggestion, the judge sentences Davey to community service as a referee-in-training for Whitey's Youth Basketball League. Under the terms of the community service, if Davey commits a crime before his sentence is completed, he will serve 10 years in prison.