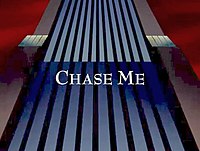 Chase Me is a 2003 American direct-to-video animated short film based on the animated series The New Batman Adventures. The film was released as a bonus feature on the DVD for Batman: Mystery of the Batwoman in the U.S. on October 21, 2003, and was produced by Warner Bros. Animation.

The piece begins with the view of the Wayne Enterprises building to which Bruce Wayne is gazing out the window during a party. He's pulled to the dance floor by three lovely young ladies. Each has her turn before Alfred rescues Bruce, who dives into a nearby elevator. When he reaches his office, he sees none other than Catwoman at the safe, looting it. Catwoman pins Bruce to the wall while she finishes robbing the safe, and makes her escape. Bruce breaks free, and heads after her as Batman.