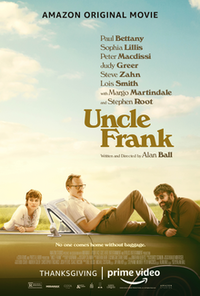 Uncle Frank is a 2020 American comedy-drama film written and directed by Alan Ball. The film stars Paul Bettany and Sophia Lillis. Set in the 1970s, Uncle Frank is a road movie about a gay man who confronts his past.

In 1973, when Frank Bledsoe and his 18-year-old niece Beth take a road trip from Manhattan to Creekville, South Carolina for the family patriarch's funeral, they're unexpectedly joined by Frank's lover Walid.