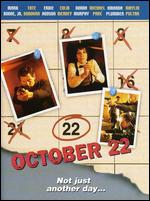 October 22 is a 1998 American drama film directed by Richard Schenkman and written by Fred Golan. It premiered at the Ft. Lauderdale Film Festival.

A group of disparate patrons in a Los Angeles diner are having breakfast when a psychopath enters with a gun, holds them hostage and has a standoff with the SWAT Team.