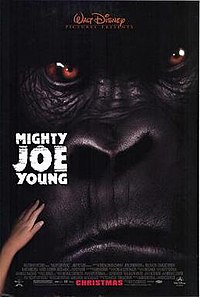 Mighty Joe Young is a 1998 American adventure film based on the 1949 film of the same name about a giant mountain gorilla brought to a wildlife preserve in Los Angeles by a young woman who raised him, and a zoologist, to protect him from the threat of poachers until one seeks Joe out in order to take his revenge. It was directed by Ron Underwood and stars Bill Paxton, Charlize Theron, and creature suit actor John Alexander as the title character. In this version, the ape is much larger than in the original. The film grossed $50.6million in the United States against a production budget of $90million.

As a child, Jill Young (Mika Boorem) witnesses the death of her mother, primatologist Ruth Young (Linda Purl), and the mother of Joe, an infant mountain gorilla, at the hands of poachers led by Andrei Strasser (Rade Šerbedžija), who loses his right thumb and trigger finger to Joe, swearing revenge.