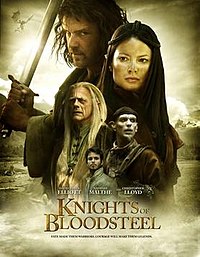 In the faraway land of Mirabilis, the warlord Dragon-Eye has unleashed his terrifying forces to hunt down the source of all power, a legendary Crucible. With freedom hanging in the balance, a motley band of knights embarks on a dangerous mission to fight against the dreaded assassins, dragons and soldiers of Dragon-Eye and rescue their world from the clutches of evil once and for all. The knights include Adric, a con man; John Serragoth, a warrior for hire; Perfidia, an elven fighter who is the niece of a sorcerer who sits on the kingdom's governing council; and Ber-Lak, a goblin miner who has been infected by exposure to the mystical element known as bloodsteel.